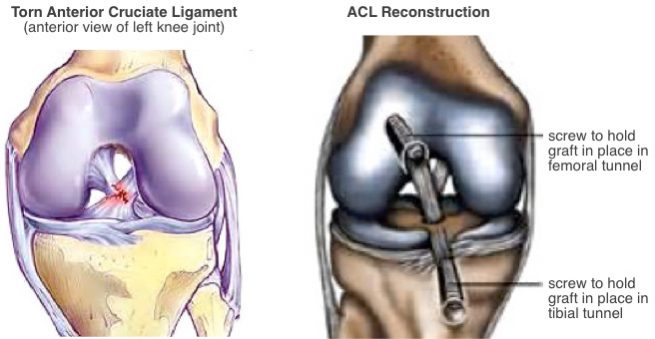 Arthroscopic reconstruction of the anterior cruciate ligament (ACL) in cruciate deficient knees is an effective operation in restoring normal knee function. However, single bundle ACL reconstruction methods may fail to restore knee rotatory stability in cases where there has been associated injury to the anterolateral (front and side) structures of the knee.

The best treatment in these individuals is a current topic of debate, with primary ACL graft failure being a significant issue, particularly in young athletes returning to high-level sport.

It has been suggested that combined ACL reconstruction and extra-articular tenodesis can achieve improved postoperative stability in these patients. Recently, there has been significant interest in the anatomy of the anterolateral structures of the knee and their role in the control of tibial internal rotation, as well as in the role of the anterolateral ligament (ALL) and the iliotibial band in the rotatory stability of the knee.

A multicentre clinical trial is currently underway comparing rotational stability following ACL reconstruction with or without lateral extra-articular tenodesis. The researchers leading the trial, Getgood et al, hypothesised that anterolateral complex reconstruction by way of a Lateral Extra-articular Tenodesis (LET) in combination with single bundle ACL reconstruction would reduce the risk of persistent rotatory laxity in young people who are deemed as being at high risk of failure.

The early results were presented at the ISAKOS Congress in Shanghai this year; however, it is too early to determine with any certainty whether LET in combination with ACL reconstruction decreases the risk of graft failure.

While not yet conclusive, the trial is a promising start to finding an effective treatment path for individuals deemed to be at a high risk of graft failure. When the final results are available it will help shed further light on the best management of ACL rupture in high-risk patients.

ACL injuries occur most commonly during sports and can happen in several ways. A sudden directional change (where twisting occurs in the knee), slowing down while running, landing from a jump incorrectly, or a direct blow to the side of your knee can all cause an ACL tear.

ACL tears are very painful, and some patients even report hearing a popping sound from the knee at the time of the injury. Aside from the obvious pain at the site of the tear, other symptoms can include swelling of the joint and a feeling of instability (like your knee is going to dislocate or “pop out”.

Various treatment options, both surgical and non-invasive are available for ACL tears, but as with most sporting injuries, prevention is better than a cure (or treatment). A lot of the time these injuries occur, it’s either because the player/athlete isn’t conditioned to the level they’re playing at (not enough practice). For example, you wouldn’t run a marathon for your first foray into running. You should start small and build up slowly and steadily to where you want to be.

ACL tears can also happen when they haven’t warmed up properly. For injury prevention in any sport, appropriately warming up and stretching all the relevant muscles and ligaments is essential. Stretching and warm-up exercises increase blood flow and flexibility, decreasing the risk of suffering serious injuries.

Another guaranteed way to suffer an injury is by attempting to carry on after you’ve exhausted yourself. This is when your guard is down, and you become more vulnerable to injury. Know when your time is up and you’ve done your best, and don’t try to be a hero.

Unlike a sprain, these injuries don’t repair themselves so if you believe you may have torn your ACL, it is essential you seek medical assistance.

What to expect from and after ACL Reconstruction Surgery :

Arthroscopy involves the surgeon making small incisions and using thin surgical instruments to diagnose and treat problems. As with any surgery, there are risks and potential complications involved.

Infection is a risk following any surgery, and can usually be treated with oral antibiotics. In the rare instance of severe or very deep infections occurring, they may need to be treated with IV antibiotics and/or potentially further surgery.

Nerve damage in the area of surgery is a rare complication, and in most instances improves or resolves over time.

Recovery time will depend on the type of surgery performed, and you may need to wear a knee brace or use crutches while you’re recovering.

Physical therapy may be required to help you regain strength in your knee and to restore your range of motion in the affected joint.